I believe I have the secret to:

There may be some people out there that want ultimate to be “our little secret” (who’s our?) and that the uniqueness of ultimate would be ruined if it became “mainstream.” I respectfully disagree.

I know how much ultimate has benefited my life and I see every day how much it benefits the kids we coach at Elevate Ultimate. I believe every child in the world deserves to have that feeling of a perfect flick coming off their fingers. I believe every child deserves to learn the value of true teamwork and how to resolve conflicts without a referee in a high stakes situation. I believe that if more kids have the experience I have had with ultimate, the world will be a better place.

There are two main systemic issues that I’d like to discuss today: Local Disc Organizations’ (LDOs) Lack of Focus and the ultimate community’s Negative Money Mindset. I believe that these two issues combined have caused a vicious negative loop that is stifling the growth of ultimate. If we solve both of these issues, kids of all races, socio-economic statuses, and diverse gender identities, will have more access to the sport we all love.

Before you read on, my sincere goal is not to attack LDOs since all the growth that youth ultimate has seen is quite literally because of the work LDOs have put in for 5 – 30 years. My goal is to hopefully convince you that we (Elevate) have created a successful and replicable model here in Vancouver that would benefit every ultimate community in North America / the world. It’s a model that I believe could and should run in partnership with LDOs to take the burden of organizing youth ultimate off their shoulders, and to grow the sport to new heights.

I didn’t learn a lot in business school, but the one thing I did learn is the importance of “finding your niche.” LDOs are a prime example of ones that are trying to do too much.

One thing I need to clarify right away is that this wasn’t done on purpose: It was done out of necessity. I don’t believe that LDOs set out to try to provide ultimate, double disc, and goaltimate for every single age range and skill level. LDOs just kept saying yes because it was their mandate to grow the sport, and all the growth we have seen in the sport is due to the hard work of the people in LDOs.

I have had the pleasure of speaking with the youth coordinators from Bay Area Disc, DiscNY, BUDA, Altitude Youth Ultimate, and Portland Ultimate. While they were all doing amazing work, they all had similar “issues” – Not getting enough kids (marketing), and trouble finding, training, and retaining coaches.

I would argue that these issues are actually only symptoms stemming from the root issue, which I would argue is a lack of organizational focus.

Why is marketing an issue?

Why is finding, training, and retaining coaches an issue?

From my outside perspective, I’d say the answer to both of these questions is that they don’t have someone focused on it. Actually, let me rephrase. They have one “youth coordinator” who is in charge of marketing, booking schools, coordinating the league, finding coaches, training coaches, retaining coaches, coming up with curriculum, customer service, and more.

At Elevate, we have 10 managers splitting up these jobs and laser focused on each one. Is it really surprising that one person can’t juggle all these jobs and do them effectively? Let’s move on to the next core issue which I believe is holding organizations back from hiring this necessary team.

Why Do We Hate Money In Ultimate?

“There’s no way we could afford to hire 10 people,” says the LDO.

“We don’t get enough registrations, or if we do, we only make a limited amount of money because our prices are low.”

“We don’t have someone focused on marketing so we don’t get a lot of registrations…and we rely heavily on volunteer coaches so our programs aren’t always top notch so we can’t charge too much money.”

Can you see how this is a negative loop? 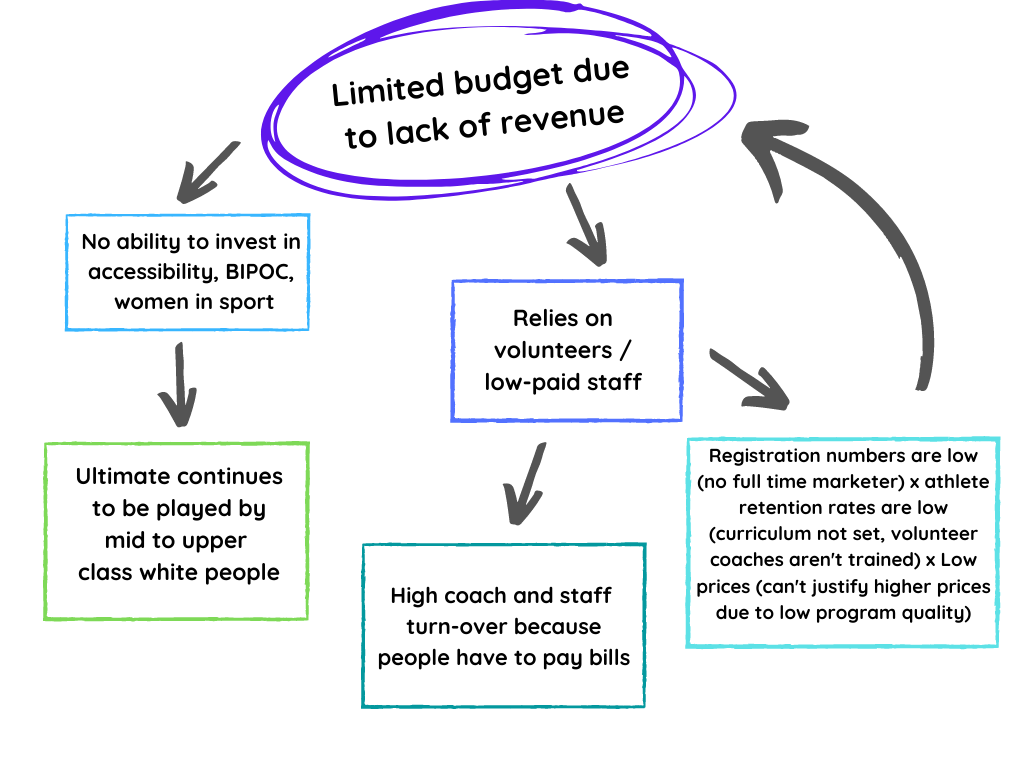 By not charging market rates to families that can afford it, organizations don’t have the necessary revenue to hire a marketer, pay their coaches, or even afford to subsidize costs for families that are in need of it. Without a marketer and dedicated paid coaches, registration numbers will never grow and the program quality will never be certain as volunteers come and go with various coaching skills. Because the program quality highly depends on the coaches, the return rate of athletes is low and higher prices cannot be justified.

This model not only shoots itself in the foot, but also prevents its ability to provide ultimate to groups that would increase the diversity of ultimate. With this model, the organization can only afford to serve the “existing pie” (middle to upper class families that had the privilege of being introduced to ultimate, usually through more affluent high schools or colleges) and can’t invest in “growing the pie” through low-cost school programs and other grassroots initiatives.

One argument I’ve heard to justify low-prices is that “it’s wrong to profit off youth ultimate.” Why? Why are we so judgmental of anyone that is trying to make money in ultimate? Why is wanting to get paid for providing immense value to kids wrong?

I’m of course biased as I make a living off providing ultimate to kids. However, I can also say that in the summer of 2020 during the height of Covid-19, we had a payroll of $100,000 which went to 30+ young coaches in a job market that was extremely tough on young adults. I can also say that because we have sufficient amounts of revenue, we can afford to dedicate $20,000+ to help increase the number of BIPOC youth playing ultimate. Can LDOs using their low-priced model say the same?

At the end of the day, I believe we all have the same goal of getting more kids playing ultimate. I’m obviously a fan of the for-profit business model but that’s mostly just because I don’t like all the red tape of non-profits (AGMs?? Blech). The legal structure shouldn’t matter too much; what matters is that a separate entity with a separate team and budget is focused on growing youth ultimate in each local area.

I believe that LDOs that are juggling 10 different activities need to take a breath and step back. I believe they have to admit that they can’t do everything themselves, and that youth ultimate is an entirely different beast that needs a dedicated team focused on it.

Luckily enough, a global pandemic has given everyone ample time and opportunity to do this.

I can only speak from personal experience and I will be the first to admit I have blind spots. I am not a business expert and I realize I generalized LDOs’ approach to youth ultimate. I welcome your feedback in the comments, or via email at ari@elevateultimate.com.